All these assimilations are very flimsy. Yet most historians assert them in a few sentences, as if they were obvious. Surprisingly, a systematic comparison between Homeric and Macedonian kingship has never been attempted. In this paper I shall not undertake an exhaustive comparison, but shall outline a few observations and hypotheses which are suggested by a comparative examination of the Homeric and Macedonian evidence.

Macedonian kingship before Alexander the Great is very obscure: the main pieces of evidence are brief allusions in historians like Herodotus and Thucydides and polemic statements in the Attic orators. Modern pictures of Macedonian kingship are mainly retrospective constructions built on the accounts of the Alexander historians of the first and second centuries ad, or on the accounts of the last Antigonids by Polybius and Livy4. In comparison, we have much more details on Homeric kingship, but as everyone knows, the Homeric poems are not constitutional descriptions, but poetic creations (“Die Ilias ist kein Geschichtsbuch” – “The Iliad is no history book” – is the famous title Franz Hampl gave to one of his studies (in Serta philologica Aenipontana, R. Muth dir., Innsbruck, 1962, p. 37-63). The extent of reality and fiction in the world of Homer is hotly debated, and historical interpretation of the Homeric account is the subject of widely divergent theories. I do not want to discuss the Homeric question here, and shall content myself with a minimalist statement which everyone may accept: that the Homeric kings behave as the poet wants his audience to believe these kings behaved. In other words, even if the poet does not exactly picture any real institution, his description is realistic5.

Let us first consider whether the Homeric evidence cannot suggest hypotheses for solving some problems about the Macedonian political system.

It cannot be denied that Homeric and Macedonian kings have in some ways similar functions: they have religious duties, they lead the army, and they act as judges in some circumstances. A closer examination, however, reveals important differences.

In Macedonia it seems that most trials were judged by judges appointed by the king, but that all free Macedonians had a right to appeal to the king19. In capital affairs, according to some ancient authors, a traditional Macedonian custom ordered that the accused should be introduced before the assembly: “De capitalibus rebus vetusto Macedonum modo inquirebat exercitus – in pace erat vulgi – et nihil potestas regum valebat nisi prius valuisset auctoritas” (Curt. 6. 8. 25)20. The exact role of the assembly is not easy to determine, and it may have varied according to the circumstances. Sometimes, perhaps, the end of the investigation took place before the assembly, the king managed to convince the people that the accused was guilty, and the Macedonians immediately stoned to death the so-called traitor, acting as a collective executioner. In other cases, however, Diodorus says that the Macedonians condemned (κατέγνωσαν) a defendant, which suggests that some sort of vote – probably by acclamation – took place21.

Very often Macedonian kings chose to kill rivals or opponents without any trial. This suggests that strong kings held trials before the people only when they thought it convenient for their propaganda, to share with the Macedonians responsibility for the elimination of a powerful opponent. Some Macedonians, however, influenced by the Greek way of thinking, probably maintained that the right of life and death lay with the Macedonian dēmos, and that each accused man should have the right to defend himself in conditions which were fair. Both attitudes can be taken by the same persons in different circumstances: Olympias, who had Cleopatra and her child assassinated without any trial in 336, protests against Cassander’s unfairness in 317 because she was not given the opportunity of defending herself before the Macedonians (D.S. 19. 51. 1-4).

It is undeniable that in judicial matters the Macedonian assembly sometimes has much more power than the Homeric laoi, but it would be excessive to speak of a democratic evolution: the riotous lynching has become a pseudo-trial manipulated by the king. There is no trace in Macedonian judicial practice of a debate between elders, and the procedural rules established in many Greek cities in order to make trials fair are not common practice in Macedonia22.

As the Homeric poems do not relate any accession of a new king, we have no description of the ceremonies on such an occasion, and we cannot say whether the new king was acclaimed by his people. What is certain is that the poet justifies the power of the kings by the possession of an inherited sceptre. It is true that in the Odyssey the suitors refuse to acknowledge Telemachus as the successor of his father, but the victory of Odysseus is the triumph of dynastic legitimacy (P. Carlier, “Les basileis homériques sont-ils des rois ?”, Ktèma 21, p. 11-15). The idea that primitive Indo-European kings all had to be elected is without foundation. Macedonian kings had to be acclaimed by the assembly, but in normal conditions the Macedonians merely acknowledged by their acclamation the dynastic legitimacy of the king and his ability to reign23 – and especially to lead the army. Of course, many usurpers tried to gain the kingship by being acclaimed, but such phenomena are quite common in all monarchies. It is only when the royal family of the Temenids became extinct that the Macedonians acclaimed kings outside the royal house, and they acclaimed those who had already gained power by themselves and won great victories. The Macedonians did not elect their kings, and there is nothing even remotely democratic in the acclamation of the new king24.

Homeric kings and Macedonian kings were both hereditary, claiming a divine origin. They both have very wide powers, and the ultimate decision stays with them. Neither the Macedonian nor the Homeric kings can be considered as absolute monarchs25, because they are not the only institutions of the community. In both cases there is also a popular assembly. The Macedonian assembly sometimes takes decisions by acclamation, which the Homeric agora never does, but the pressure of the king on the dēmos is much stronger in Macedonia, and free discussion is much rarer (the common people have no right to speak in the Homeric poems, but they can listen to very straightforward discussions between the elders). Moreover, Homeric kingship is often called geras, which suggests that this honourable privilege is given by the people, or at least acknowledged by the dēmos.

Both in Macedonia and in the Homeric poems there are institutions called “councils” in modern languages, but the two “councils” have different names in Greek (while synedrion is the usual term for the Macedonian council, the Homeric elders are called gerontes, boulēphoroi, or basileis – this last term underlining that, as a group, the elders are narrowly associated with the royal functions); their composition, their functions, and above all their political significations are quite different. The members of the Macedonian council are all chosen by the king to advise and help him; a young king cannot immediately get rid of the most powerful aristocrats or the highest dignitaries named by his father, but he can promote to his council whomever he wants, even foreigners: the members of the council are the philoi, the hetairoi of the king. On the other hand, the Homeric elders, even if they hold a hereditary position, are considered – like the king – as having received their geras, their honourable privilege, from the dēmos. The Macedonian council advises the king in his palace or tent, but does not play any role as such in the assemblies. In contrast to this, the Homeric gerontes take part in all the meetings of the assembly, they sit in the middle of the agora, and they speak in front of the common people, who may express their opinion by shouting. Here is probably the main difference: in Macedonia, under normal circumstances, there is no link between the popular assembly and the royal council26.

We have no direct information on the Macedonian kingship of the seventh century, when a group of Macedonians was beginning the conquest of the higher Haliacmon valley under the direction of kings who claimed to be Temenids from Argos, but it is a reasonable hypothesis to suggest that it was not completely different from the kingships of early archaic Greece. Homeric kingships are probably amalgams of traditional images about heroic kings and – principally – of political practices familiar to the poet and his audience. It is not absurd to suppose that the first Temenids resembled the Homeric kings. Some similarities were retained later.

If we accept this hypothesis, we have also to admit that Macedonians and southern Greeks had quite divergent political evolutions during the archaic and classical periods. While in Greece collective decision by vote was replacing monarchic decision27, and at least in the democracies the council was becoming a committee preparing the projects to be voted on by the assembly, the power of the Macedonian king was growing, and the council becoming more and more dependent on the king. Those who suppose that the political evolution of all communities should take the same direction are surprised by the strength of the Macedonian kings. For A. Aymard (“Sur l’assemblée macédonienne”, 1950, = Études d’histoire ancienne, Paris, 1967, p. 162) there were many seeds of democracy in Macedonia, but the Macedonian assembly did not try to use its potential powers because the Macedonians had to fight frequent wars, and the anxiety of self-preservation created among them a strong loyalty towards the family of the war leaders. This military factor was important, but there were others as well.

The control of the Thracian mines gave great wealth to the Temenid kings, and money increases power. As Thucydides observes, tyrannies appeared in Greece with the increase of monetary wealth; previously, there were only traditional kingships with limited prerogatives (I. 13. 3 πρότερον δὲ ἦσαν ἐπὶ ῥητοῖς γέρασι πατρικαὶ βασιλεῖαι). Similarly, the considerable wealth of the Macedonian kings allowed them to build roads and fortifications, to pay mercenaries, to give magnificent gifts to many people, and to live in a brilliant court: it strengthened their hold on their subjects.

Macedonian society before Alexander is little known, but it seems that the Macedonian upper class was too heterogeneous – petty kings of upper Macedonia, landlords of the newly conquered territories, Greek hetairoi – to constitute a united group facing the king; moreover, the gap between the aristocracy and the common people of peasants and shepherds was apparently so wide that any co-ordinated action of the aristocratic royal council and the dēmos was impossible. To these factors we should add the geographical scale of the Macedonian kingdom. The comparatively large distances and considerable time involved in travel will have slowed communications and inhibited the emergence of collective discussion, thereby making monarchic decision-making a more viable practice.

Last, but not least, the influence of the Persian model, during the period of Persian domination of Macedon from 510 to 479 BC and afterwards, must not be underestimated28. For every king in the Mediterranean world, the Great King was a fascinating example.

At least from the reign of Alexander, some upper-class Macedonians adopted certain Greek political ideas: nomos (law) as opposed to bia (might), freedom of speech, hatred of tyranny. This Greek influence compelled the Antigonids to pretend to be constitutional kings reigning with moderation over free citizens. During the reigns of the Temenids, however, the main trend of evolution seems to have been towards autocracy. This evolution was completed in the oriental Hellenistic kingdoms. Hence Macedonian kingship is not only a case of non-democratic politics, but also of non-democratic evolution. 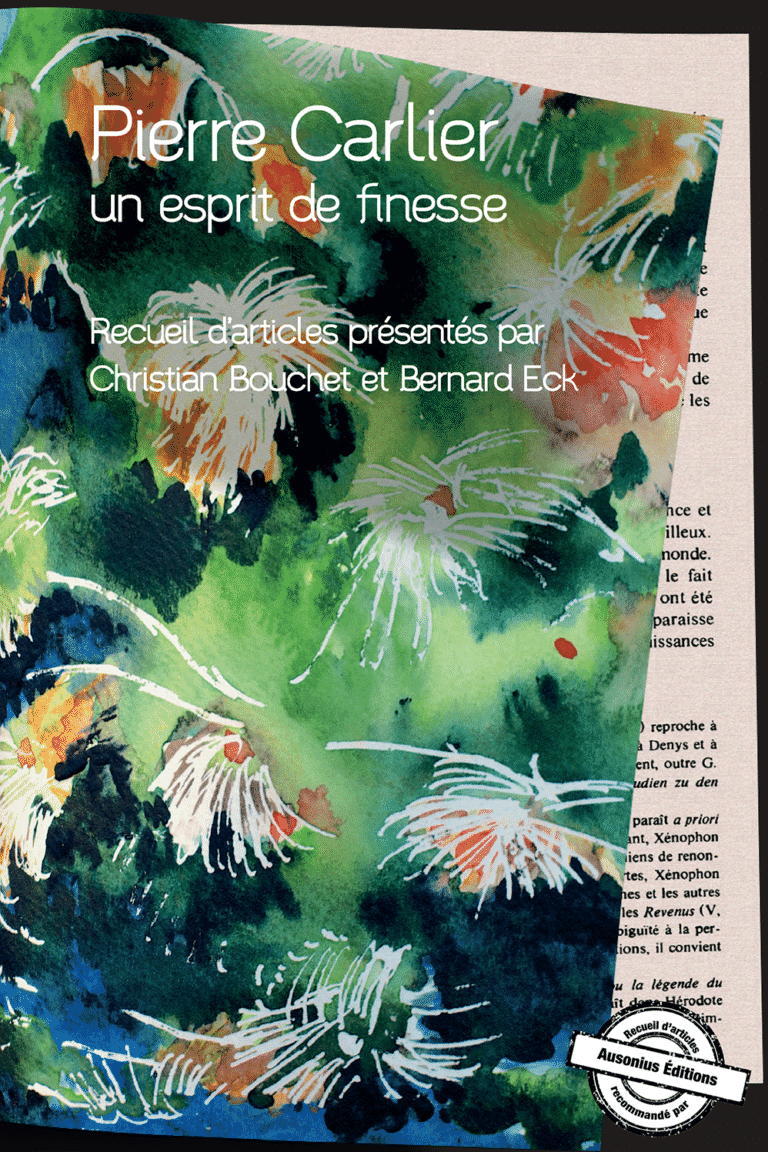